So that is me over there in the photo, going bald and going grey… I tell people it is from thinking too much… So the TL;DR of about me, I’m an older geek, who has been programming for over 30 years, been online for just a few years less than that, and been on the internet and programming websites for just over 20 years now. My strong point is backend programming on the server in PHP.

And now, as the late great Paul Harvey would say, the rest of the story…

I started programming on Commodores back around 1984 on a friends Commodore 64, as well using the one they had on display at the local grocery store while my mom was shopping. In 1985, I got my own computer, a Vic-20 (yes, I was disappointed it was a C-64, but we caught it on sale at K-Mart for $70). Then between programming at home, and programming Apple IIe’s in middle school and high school. I was addicted (still am).

In 1988, I got online (local BBS’s back at 300baud), and a new addiction grew… In the 90’s I was programming my own BBS as well as programming on a local multiline BBS. In 1995, I had my first “commercial” application that I wrote and sold. (but for the most part then and the next 10 years, I mainly just programmed for “fun”… I was an idiot not doing it for money LOL)

1996, I had my first account with an ISP doing dialup, and quickly got into making websites, quickly followed by doing things writing my own webcounters and web ring programs in C and Perl. In 1999 when I went back to college to get a degree (I dropped out back in ’91 as instead of going to classes, I would just sit in computer lab programming and also tutoring people on AutoCad) I soon was invited to join a couple other students to take over redoing the college website, overseen by the assoiceate Dean. He introduced me to PHP. I have been using it since then. That was also the year I first bought Flash version 4. Between the two. I was set.

Well flash has mostly died, PHP has gone thorugh stages, but I’m still with it and feel I know it pretty danged well. I try to stick to backend programming. If I have to do front end design, I stick to Bootstrap or like in the case of what you see here, Divi for WordPress. I know CSS, but hate doing it. I do enjoy javascript. I have been pushing myself to get more advanced in it.

So that is me, a complete geek, always will be. Bury me with my laptop! I love learning and will not stop till I drop! 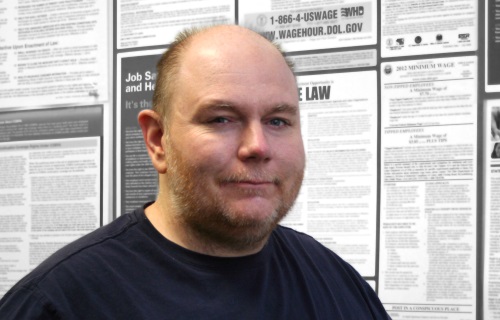